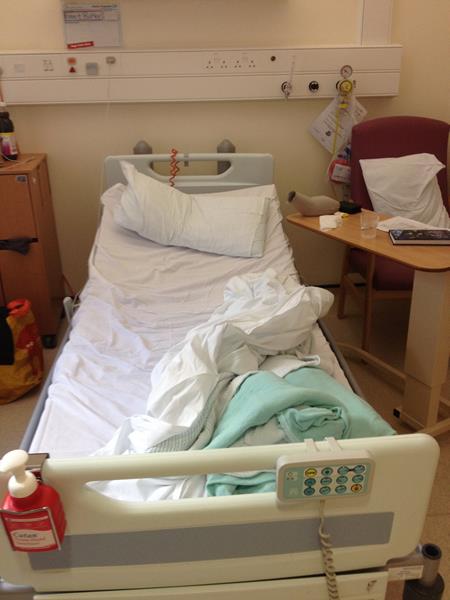 I’ve never been one to share my personal problems. Many of my twitter followers are unaware that I was signed off work for the first half-term of this year with chronic sciatica and back pain. I managed to keep involved with work despite being signed off sick, and I kept on top of my inbox and tasks I could remotely complete from home. I found it hard being at home when I didn’t feel ill, and I was able to control the pain by being horizontal or walking.

By the time my MRI results had come through I was feeling much better and I was diagnosed with a bulging disc in my spine at L5/S1. I was offered surgery but declined it because much of the pain had gone away. The disc was pliable and had recently moved, and I was given permission to return to work. I returned to work for three weeks, and although I wasn’t to sit for extended periods of time I soon settled back into my role. I believed I was getting better.

On Friday 8th March 2013 something changed. I got up as normal and had a shower, but as I got my breakfast ready a pain started to develop in the back of my legs. I’d experienced this before and thought that a dog walk might be my best course of action as gentle exercise had worked in the past. I started walking but the pain was so bad that at several stages of our walk I had to stop and get on my hands and knees to relieve the pain. As the pain intensified I realised that I wouldn’t be able to go to work that day and phoned in. The pain got worse over the day and even codeine failed to touch it. I spent the day on my hands and knees which was the position in which I experienced the least pain. A telephone appointment to the doctor proved fruitless as I was prescribed more of the same pain killers (the same ones that weren’t working). Evening came and I tried to sleep next to the bed curled over a bean bag, which wasn’t very comfortable. The pain didn’t subside but I was aware of the lack of sensation spreading from my legs to my feet and groin. At that point I knew to call for help and an ambulance was dispatched to take me to hospital.

I was taken to A&E at Derby hospital where I greedily gulped at the gas and air, and was given IV paracetamol for my pain (which is extremely effective). The doctors reviewed my last MRI on the computer and decided I needed another so after a wait for a few hours I was admitted to a ward. I had an MRI scan (my second of the year) and was dispatched back to wait on my ward for the results (still nill by mouth just in case). The results came back within the hour and I was to be prepared for theatre as soon as possible. My disc had moved and was pressing hard on my nerves causing cauda equine syndrome (CES), this is a rare condition and affects around 100 people annually in the UK. Speed is of the essence in treating CES to avoid permanent nerve damage. Blood was taken, consent forms signed and the anaesthetist put me out for a few hours. I woke up in recovery and spent the evening dozing in and out of consciousness. The next day I started to realise the gravity of my condition. My legs were tested and I had very little sensation in the backs of my legs and the soles of my feet (which makes walking a wobbly affair!) and my groin/saddle area were completely numb.

I spent several days more in hospital while I was tested, prodded, fed microwave food and observed. My pulse/blood pressure and temperature were checked every four hours and my fluid intake & output monitored carefully as well as any output from my bowels. I can’t fault the service I received at Derby hospital – the work ethic and compassion of the staff on my ward was humbling. Eventually I was discharged home with a number of follow-up appointments, after a total of 6 days in hospital.

So where am I now? The doctors won’t class any of my nerve damage as permanent until at least 12 months which means I could have a long recovery ahead. No one can say if my condition will improve, or by how much if it does. I have no feeling in my buttocks/saddle which has implications for toileting. I have no feeling in my groin (which means I have to use a catheter since I can’t make myself urinate) and the backs of my legs and bottom of my feet are still numb (cue comedy Charlie Chaplin walking). I hope that I will make at least a partial recovery but I am powerless to do anything but wait and see. I’ve still got a lot to be thankful for since I am still mobile (comedy walking is still better than no walking) and I’m not in pain at the moment.