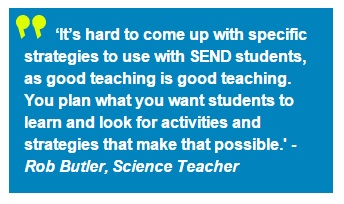 Following the publication of my article in the ASE’s EiS (Education in Science) magazine and on their website, I was offered the chance to host #ASEchat on Twitter with a special needs theme.

@viciascience opened with questions about specific needs which led to a discussion about visually impaired and hearing impaired students.  @cleverfiend raised the issue of specialist vocabulary and @viciascience promoted an event in Huddersfield on 21st Nov.

@DrWilksinsonSci said he gave out slips of paper for everyone to answer same question on, then some were picked to critique as a group, and the rest were checked by teacher later for misconceptions.

@cleverfiend asked if it was teaching SEN students that teachers struggle with or having to teach them within a larger mixed ability group.  @viciascience reminded us that their diverse needs could be hard to meet, especially when some are very demanding of attention.  Photography was suggested as a useful strategy and @cleverfiend added video, and with tablets tools like comic strips become a powerful tool.   ComicLife and HalfTone were suggested as good comic strip apps.

@A_Weatherall recommended a comic book about the universe which he had used with students http://www.jldunbar.com/home/the-universe-verse

Kinaesthetic activities and practical activities were recommended by chat participants, for example modelling solubility with rice and peas.

Talking Tom was suggested as a good app to encourage reluctant or EAL students to speak in class.

Graphing was a problem, especially where maths ability lags behind science ability. @cleverfiend suggested checking out the old Science Year CDs from the ASE and advice from Anne Goldsworthy.  @ViciaScience suggested the AKSIS materials from the ASE for good advice on scaling etc.  IanMcDaid suggested gingham tablecloths and dry wipe markers.

@cleverfiend Have you used templates and photos to promote structured writing? Table mat idea with photo in centre as stimulus? #ASEchat

@cleverfiend but that is same for all students? Curriculum overload. Lets focus on Big ideas instead #ASEChat